All through the calculus we are dealing with quantities that are growing, and with rates of growth. We classify all quantities into two classes: constants and variables. Those which we regard as of fixed value, and call constants, we generally denote algebraically by letters from the beginning of the alphabet, such as \(a\), \(b\), or \(c\); while those which we consider as capable of growing, or (as mathematicians say) of “varying,” we denote by letters from the end of the alphabet, such as \(x\), \(y\), \(z\), \(u\), \(v\), \(w\), or sometimes \(t\). 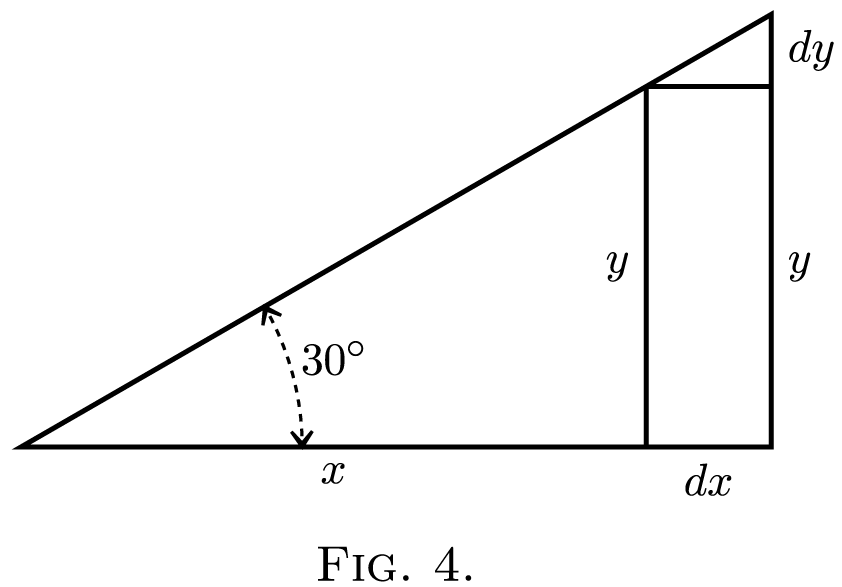 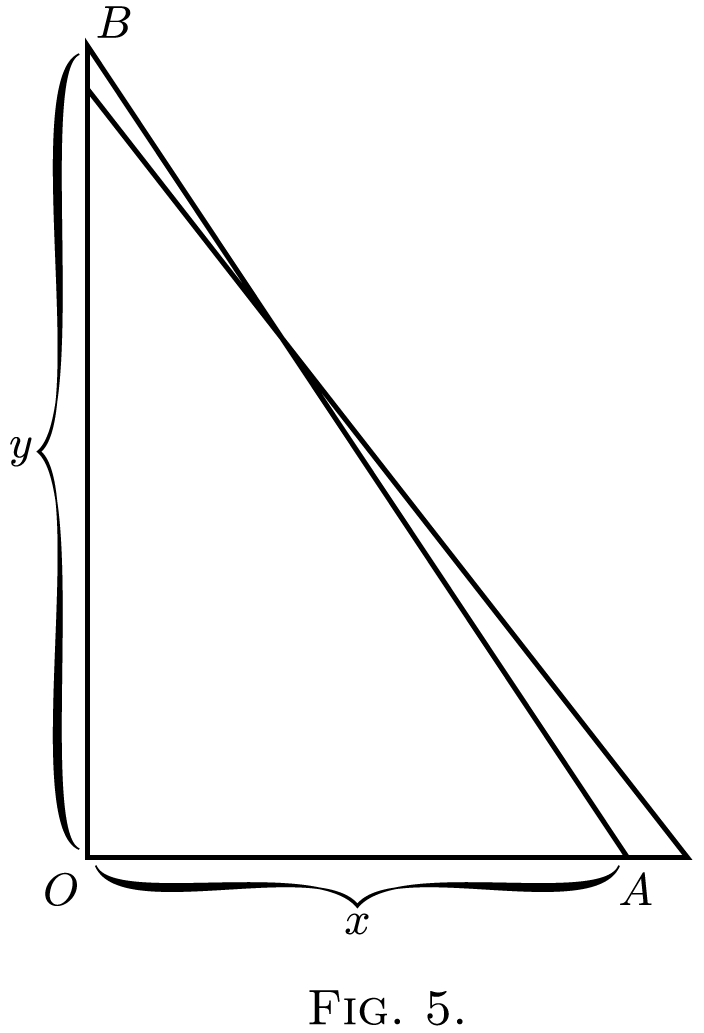 It is also easy to see that (except in one particular position) \(dy\) will be of a different size from \(dx\).

Now right through the differential calculus we are hunting, hunting, hunting for a curious thing, a mere ratio, namely, the proportion which \(dy\) bears to \(dx\) when both of them are indefinitely small.

It should be noted here that we can only find this ratio \(\dfrac{dy}{dx}\) when \(y\) and \(x\) are related to each other in some way, so that whenever \(x\) varies \(y\) does vary also. For instance, in the first example just taken, if the base \(x\) of the triangle be made longer, the height \(y\) of the triangle becomes greater also, and in the second example, if the distance \(x\) of the foot of the ladder from the wall be made to increase, the height \(y\) reached by the ladder decreases in a corresponding manner, slowly at first, but more and more rapidly as \(x\) becomes greater. In these cases the relation between \(x\) and \(y\) is perfectly definite, it can be expressed mathematically, being \(\dfrac{y}{x} = \tan 30\)° and \(x^2 + y^2 = l^2\) (where \(l\) is the length of the ladder) respectively, and \(\dfrac{dy}{dx}\) has the meaning we found in each case.

We call the ratio \(\dfrac{dy}{dx}\) “the differential coefficient of \(y\) with respect to \(x\).” It is a solemn scientific name for this very simple thing. But we are not going to be frightened by solemn names, when the things themselves are so easy. Instead of being frightened we will simply pronounce a brief curse on the stupidity of giving long crack-jaw names; and, having relieved our minds, will go on to the simple thing itself, namely the ratio \(\dfrac{dy}{dx}\).

In ordinary algebra which you learned at school, you were always hunting after some unknown quantity which you called \(x\) or \(y\); or sometimes there were two unknown quantities to be hunted for simultaneously. You have now to learn to go hunting in a new way; the fox being now neither \(x\) nor \(y\). Instead of this you have to hunt for this curious cub called \(\dfrac{dy}{dx}\). The process of finding the value of \(\dfrac{dy}{dx}\) is called “differentiating.” But, remember, what is wanted is the value of this ratio when both \(dy\) and \(dx\) are themselves indefinitely small. The true value of the differential coefficient is that to which it approximates in the limiting case when each of them is considered as infinitesimally minute.

How to read Differentials

It will never do to fall into the schoolboy error of thinking that \(dx\) means \(d\) times \(x\), for \(d\) is not a factor—it means “an element of” or “a bit of” whatever follows. One reads \(dx\) thus: “dee-eks”.In case the reader has no one to guide him in such matters it may here be simply said that one reads differential coefficients in the following way. The differential coefficient

Second differential coefficients will be met with later on. They are like this:

and it means that the operation of differentiating \(y\) with respect to \(x\) has been (or has to be) performed twice over.

Another way of indicating that a function has been differentiated is by putting an accent to the symbol of the function. Thus if \(y=F(x)\), which means that \(y\) is some unspecified function of \(x\) (see this), we may write \(F'(x)\) instead of \(\dfrac{d\bigl(F(x)\bigr)}{dx}\). Similarly, \(F^{\prime\prime}(x)\) will mean that the original function \(F(x)\) has been differentiated twice over with respect to \(x\).