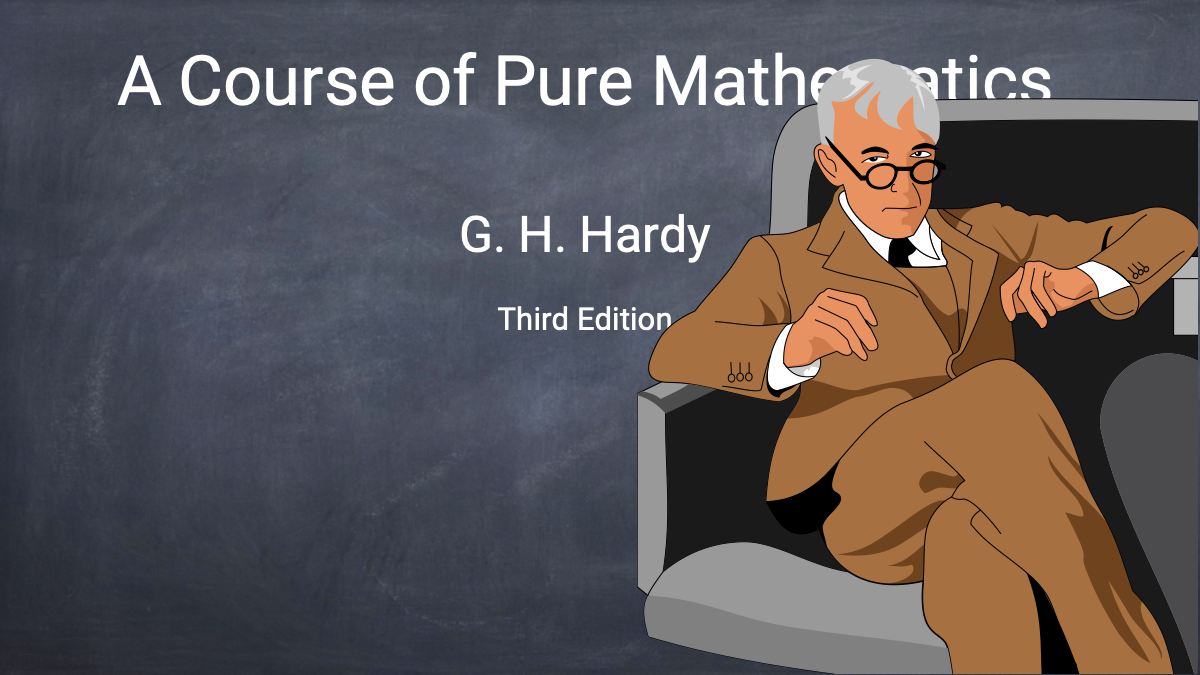 FELLOW OF NEW COLLEGE
SAVILIAN PROFESSOR OF GEOMETRY IN THE UNIVERSITY OF OXFORD
LATE FELLOW OF TRINITY COLLEGE, CAMBRIDGE

Cambridge at the University Press

Preface to the third edition

No extensive changes have been made in this edition. The most important are in §§ 80–82, which I have rewritten in accordance with suggestions made by Mr S. Pollard.

The earlier editions contained no satisfactory account of the genesis of the circular functions. I have made some attempt to meet this objection in § 158 and Appendix III. Appendix IV is also an addition.

It is curious to note how the character of the criticisms I have had to meet has changed. I was too meticulous and pedantic for my pupils of fifteen years ago: I am altogether too popular for the Trinity scholar of to-day. I need hardly say that I find such criticisms very gratifying, as the best evidence that the book has to some extent fulfilled the purpose with which it was written.

Extract from the preface to the second edition

The principal changes made in this edition are as follows. I have inserted in Chapter I a sketch of Dedekind’s theory of real numbers, and a proof of Weierstrass’s theorem concerning points of condensation; in Chapter IV an account of ‘limits of indetermination’ and the ‘general principle of convergence’; in Chapter V a proof of the ‘Heine-Borel Theorem’, Heine’s theorem concerning uniform continuity, and the fundamental theorem concerning implicit functions; in Chapter VI some additional matter concerning the integration of algebraical functions; and in Chapter VII a section on differentials. I have also rewritten in a more general form the sections which deal with the definition of the definite integral. In order to find space for these insertions I have deleted a good deal of the analytical geometry and formal trigonometry contained in Chapters II and III of the first edition. These changes have naturally involved a large number of minor alterations.

Extract from the preface to the first edition

This book has been designed primarily for the use of first year students at the Universities whose abilities reach or approach something like what is usually described as ‘scholarship standard’. I hope that it may be useful to other classes of readers, but it is this class whose wants I have considered first. It is in any case a book for mathematicians: I have nowhere made any attempt to meet the needs of students of engineering or indeed any class of students whose interests are not primarily mathematical.

I regard the book as being really elementary. There are plenty of hard examples (mainly at the ends of the chapters): to these I have added, wherever space permitted, an outline of the solution. But I have done my best to avoid the inclusion of anything that involves really difficult ideas. For instance, I make no use of the `principle of convergence’: uniform convergence, double series, infinite products, are never alluded to: and I prove no general theorems whatever concerning the inversion of limit-operations—I never even define $\dfrac{\partial^{2} f}{\partial x\, \partial y}$ and $\dfrac{\partial^{2} f}{\partial y\, \partial x}$. In the last two chapters I have occasion once or twice to integrate a power-series, but I have confined myself to the very simplest cases and given a special discussion in each instance. Anyone who has read this book will be in a position to read with profit Dr Bromwich’s Infinite Series, where a full and adequate discussion of all these
points will be found.

9. Relations of magnitude between real numbers

21. The graphical representation of functions. Coordinates

31. Functions of two variables and their graphical representation

43. The quadratic equation with real coefficients

46. Rational functions of a complex variable

LIMITS OF FUNCTIONS OF A POSITIVE INTEGRAL VARIABLE

50. Functions of a positive integral variable

53-57. Properties possessed by a function of n for large values of n

58-61. Definition of a limit and other definitions

79. The representation of functions of a continuous real variable by means of limits

80. The bounds of a bounded aggregate

81. The bounds of a bounded function

82. The limits of indetermination of a bounded function

83-84. The general principle of convergence

87-88. Applications to $z^n$ and the geometrical series

98-99. Continuous functions of a real variable

100-104. Properties of continuous functions. Bounded functions. The oscillation of a function in an interval

115. The notation of the differential calculus

ADDITIONAL THEOREMS IN THE DIFFERENTIAL AND INTEGRAL CALCULUS

149. Applications of Taylor’s Theorem to maxima and minima

150. Applications of Taylor’s Theorem to the calculation of limits

152–154. Differentiation of functions of several variables

163. Application to the binomial series

THE CONVERGENCE OF INFINITE SERIES AND INFINITE INTEGRALS

165–168. Series of positive terms. Cauchy’s and d’Alembert’s tests of convergence

189. Abel’s and Dirichlet’s tests of convergence

195. Multiplication of series in general

THE LOGARITHMIC AND EXPONENTIAL FUNCTIONS OF A REAL VARIABLE

202. The logarithmic scale of infinity

216. Alternative development of the theory

THE GENERAL THEORY OF THE LOGARITHMIC, EXPONENTIAL, AND CIRCULAR FUNCTIONS

220. Definition of the logarithmic function

221. The values of the logarithmic function

227–230. The trigonometrical and hyperbolic functions

231. The connection between the logarithmic and inverse trigonometrical functions

Appendix I. The proof that every equation has a root

Appendix IV. The infinite in analysis and geometry