The number of essentially different types of functions with which we have been concerned in the foregoing chapters is not very large. Among those which have occurred the most important for ordinary purposes are polynomials, rational functions, algebraical functions, explicit or implicit, and trigonometrical functions, direct or inverse.

We are however far from having exhausted the list of functions which are important in mathematics. The gradual expansion of the range of mathematical knowledge has been accompanied by the introduction into analysis of one new class of function after another. These new functions have generally been introduced because it appeared that some problem which was occupying the attention of mathematicians was incapable of solution by means of the functions already known. The process may fairly be compared with that by which the irrational and complex numbers were first introduced, when it was found that certain algebraical equations could not be solved by means of the numbers already recognised. One of the most fruitful sources of new functions has been the problem of integration. Attempts have been made to integrate some function \(f(x)\) in terms of functions already known. These attempts have failed; and after a certain number of failures it has begun to appear probable that the problem is insoluble. Sometimes it has been proved that this is so; but as a rule such a strict proof has not been forthcoming until later on. Generally it has happened that mathematicians have taken the impossibility for granted as soon as they have become reasonably convinced of it, and have introduced a new function \(F(x)\) defined by its possessing the required property, viz. that \(F'(x) = f(x)\). Starting from this definition, they have investigated the properties of \(F(x)\); and it has then appeared that \(F(x)\) has properties which no finite combination of the functions previously known could possibly have; and thus the correctness of the assumption that the original problem could not possibly be solved has been established. One such case occurred in the preceding pages, when in Ch. VI we defined the function \(\log x\) by means of the equation \[\log x = \int \frac{dx}{x}.\]

Let us consider what grounds we have for supposing \(\log x\) to be a really new function. We have seen already (Ex. XLII. 4) that it cannot be a rational function, since the derivative of a rational function is a rational function whose denominator contains only repeated factors. The question whether it can be an algebraical or trigonometrical function is more difficult. But it is very easy to become convinced by a few experiments that differentiation will never get rid of algebraical irrationalities. For example, the result of differentiating \(\sqrt{1 + x}\) any number of times is always the product of \(\sqrt{1 + x}\) by a rational function, and so generally. The reader should test the correctness of the statement by experimenting with a number of examples. Similarly, if we differentiate a function which involves \(\sin x\) or \(\cos x\), one or other of these functions persists in the result.

We have, therefore, not indeed a strict proof that \(\log x\) is a new function—that we do not profess to give—but a reasonable presumption that it is. We shall therefore treat it as such, and we shall find on examination that its properties are quite unlike those of any function which we have as yet encountered. 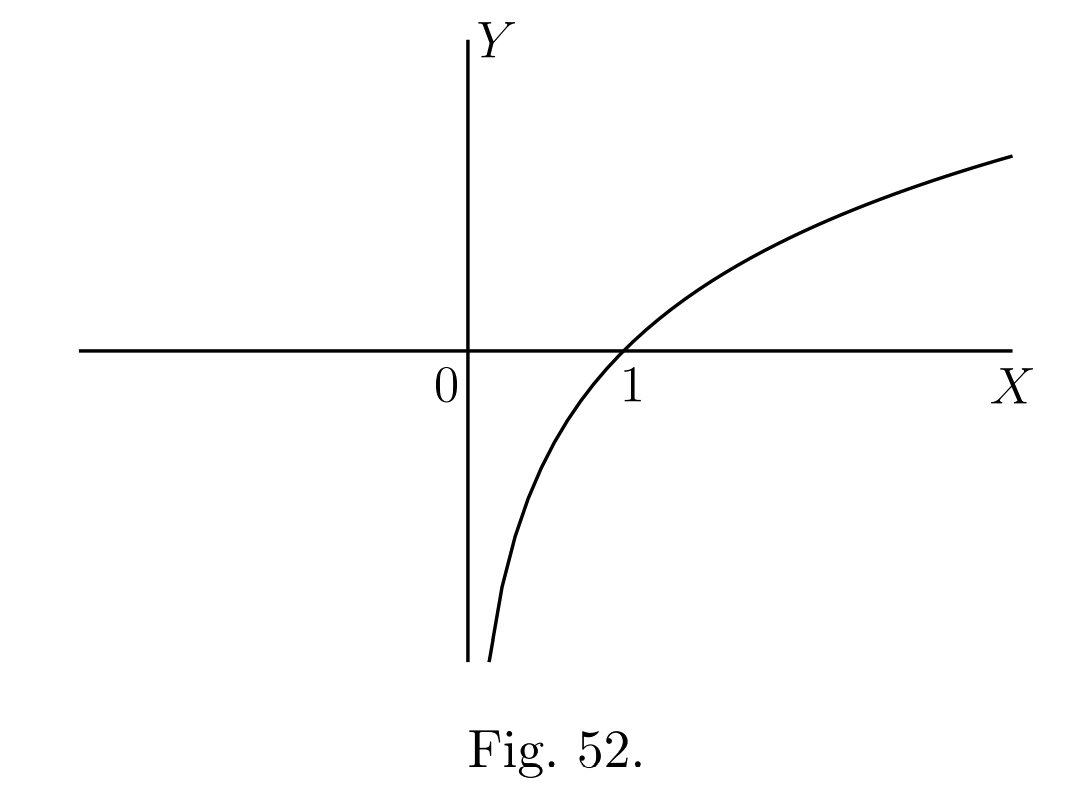 The general form of the graph of the logarithmic function is shown in Fig. 52. Since the derivative of \(\log x\) is \(1/x\), the slope of the curve is very gentle when \(x\) is very large, and very steep when \(x\) is very small.